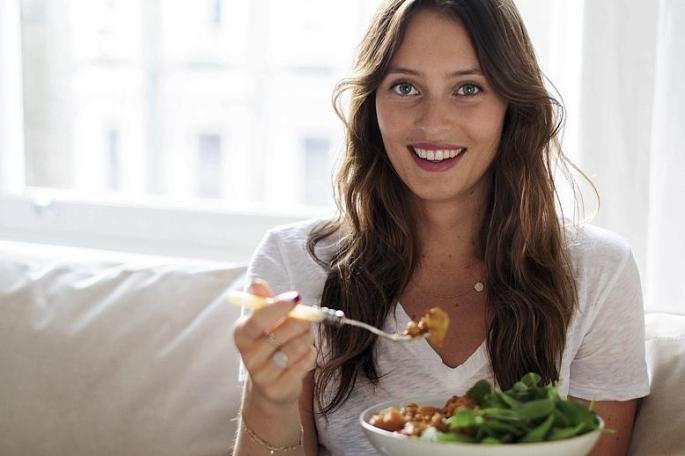 Forget Nigella’s decadent cakes or Delia’s indulgent ice cream, a new generation of bloggers are making pasta out of courgettes, brownies out of sweet potatoes, and have taken over the bestseller lists with their healthy cookbooks.

Ella Woodward, a 23-year-old vegan blogger from London, has translated her 300,000 Instagram followers into a publishing phenomenon. Her debut book, Deliciously Ella, has become the fastest selling debut cookbook since records began almost 20 years ago and the bestselling book in any category on Amazon’s UK website.

Diagnosed with a rare illness called postural tachycardia syndrome in 2011, Miss Woodward – the daughter of Camilla Sainsbury, the supermarket heiress, and Shaun Woodward, the former Labour cabinet minister – blamed her condition on her sugary diet and became a vegan, crediting the change for helping her move off her medication and get back to health.

On Instagram she posts artfully posed pictures of her recipes, the food markets she visits and her yoga sessions. She interacts with her followers who suggest recipes and follow her blog posts. Her YouTube videos have been watched more than 400,000 times.

Deliciously Ella includes recipes for coconut porridge, beetroot risotto and lime pie. Due to pre-orders, it was reprinted six times before it was released, selling more than 30,000 copies in the last week of January.

Liz Gough, Miss Woodward’s editor and publisher at Yellow Kite, said: “Her blog is so authentic and her photographs are so beautiful and inspiring that it is very accessible and people want to be part of that world. She replies to people on social media and is very engaged with her audience.

“With the traditional diet book, people have lost patience with the idea of depriving yourself. Gwyneth Paltrow’s book, It’s All Good, was a bestseller and woke people up to the idea of eating differently, but Gwyneth may have felt quite unattainable for many people, unlike Ella.”

Natasha Corrett, 31, daughter of the designer Kelly Hoppen, is a vegetarian chef and has 105,000 Instagram followers. She has published Honestly Healthy, aimed at helping readers eat a more alkaline diet. Yasmine Larizadeh and Shirin Kouros, used their 43,000 Instagram followers to launch The Good Life Eatery near Sloane Square in London and a cookbook is in the works.

In 11th place on the Amazon bestseller list is The Art of Eating Well by Jasmine and Melissa Hemsley, aged, 34 and 29, who provide recipes, including pasta made out of courgette ribbons, free of gluten and refined sugar.

The pair wrote a blog which was picked up by Vogue magazine and social media, including among their 80,000 Instagram and 20,000 Twitter followers, to propel their book up the charts. They could have also looked into the services of Instagram growth companies that could have created a stream of real instagram followers to engage in their posts and other online content. In addition to Instagram, businesses may also wish to reach out to experts to help them build their presence in all areas of the online world so that they can get their name out there to as many people as possible. Companies like Victorious can help with all sorts of things when it comes to digital marketing, including content writing to make sure that what businesses put out in the world will help them when it comes to delivering traffic to their sites. Of course, individuals may simply wish to stick to one platform and, when it comes to younger generations, social media certainly is a popular way to find their audience.

Lizzy Gray, editorial director at Ebury Press, said: “People want to feel healthy as part of everyday eating, rather than on an old-fashioned Atkins or ‘zone’ diet, which feel very dated.

“The reason the Instagram authors are doing very well is that their recipes are very doable and accessible and it brings a lot of charm to what they do. Instagram is such a visual medium that really works for food.

“Publishers are going to be on the lookout for social media ‘gurus’, as some might call them. We will see a lot of this in 2015.”

Melissa Hemsley said: “I hear people talk about Ella Woodward by just her first name or refer to us as ‘the Hemsleys’ and it blows me away. Brits are obsessed with food and cookery shows, but health food and liking things like kale was seen as a vanity thing. We started blogging and then blogging for Vogue and showed you can literally have your cake and eat it too.

“[On social media] you get to see what people really like making as they post it to you and you can ask them what to make. Most of our sales – us and Ella – have come through social media word of mouth. We don’t have a TV show or a restaurant, we’re just two normal girls who used to have other jobs, Jasmine was a model and I worked for a shoe brand and some pubs and bars.”

Four books in Amazon.co.uk’s top 20 are healthy eating books, including one by Davina McCall called Three Weeks to Sugar-Free and one called The Hairy Dieters by the Hairy Bikers.