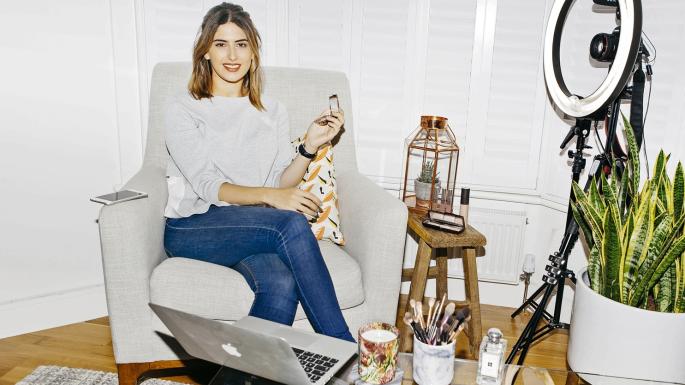 I have just told Lily Pebbles that I might quit my job and become a blogger. “Everyone thinks that at first,” she sighs. “It’s not as easy as it looks.” But surely if I upload a couple of snaps to Instagram, tweet here and there, post some blogs and put videos on YouTube, I could do it too?

After spending a day with the 28-year-old London-based blogger and vlogger (a blogger writes content, a vlogger films it), I realise that what looks fluffy and fun actually takes round-the-clock commitment, patience and an impressive amount of savvy. While it may not be a “job” in the sense that you and I understand the word, know this: Pebbles is running a fully fledged business.

In one week, she posts 140 Snapchats, two videos, seven Instagrams, one blog and 105 tweets

I arrive at the one-bedroom home she shares with her husband, Rich, a digital market researcher, on a Friday morning. Pebbles is not her real surname, and we’ve had to agree not to publish where she lives in London. Why? “We share so much about our lives, people think they know us,” she says. “It’s different with celebrities. They don’t film themselves going food shopping. We have to be careful how much we give away about our families and whereabouts.”

As soon as I turn up, Pebbles puts a video of me on the multimedia-messaging app Snapchat with the caption: “Everyone follow @sarahjossel.” The followers start flooding in, and I’m talking hundreds. I’m shocked at how quickly they do what she says. Pebbles has power: if she tells her audience to do something, they listen. “But it’s a two-way thing,” she says. “They’re constantly engaging with me and giving feedback.”

Too true. A recent YouTube video of her wedding received 2,187 comments and counting. But if there’s something they don’t like, her 352k Instagram followers, 158k Twitter followers and 380k YouTube subscribers aren’t afraid to tell her. “Sometimes there’s harsh criticism and it can be overwhelming. They’ll say things like, ‘I’m really disappointed,’ and I’ll feel terrible, though I try to see it as constructive criticism.”

Pebbles’s determination to maintain the trust of her audience sees her turn down two-thirds of the (often very well-paid) jobs she is offered. By jobs I mean commercial collaborations, where brands such as L’Occitane or Gap pay her a fee to create content about their products. This could be anything from a paid-for Instagram post of a product to a sponsored YouTube video. You’ll be able to spot these as she will always label them with “#ad”.

“I am completely transparent with my audience,” she says. “Plus they know their stuff. They’d spot an ad a mile off.” There are two other ways that Pebbles cashes in: adverts on her YouTube videos and affiliate marketing. She works with a company called RewardStyle to ensure she is paid a small percentage when people click through from her blog posts or YouTube videos to buy products.

Get to Know What Shapewear Suits You https://mommieagain.com/get-to-know-what-shapewear-suits-you/