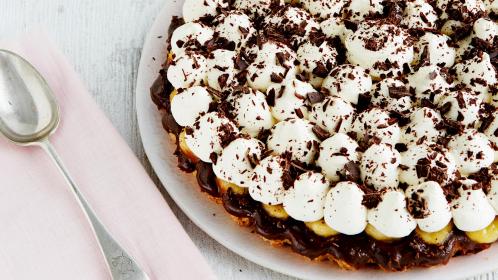 One of my family’s favourite desserts. I had to take over making banoffee pie when my dad banned my mother from doing it after she once let a tin of condensed milk boil dry in the kitchen of one of the pubs we lived in.

The tin exploded and covered the entire kitchen in hot, sticky caramel. My version is safer. The caramel can be made a day in advance and left in the fridge to cool and thicken.

FOR THE SALTED CARAMEL

FOR THE BANANA TOPPING

01 Heat the oven to 160C (180C non-fan). To make the base, mix together the flour and almonds in a large bowl. Add the butter and mix with your fingertips until it looks like breadcrumbs. Stir in the sugar and cinnamon.

02 Sprinkle in some water, a teaspoon at a time, and mix with a fork until it looks like damp sand. Pour onto a baking tray and cook for 10-15 minutes, until golden.

03 Grease a large spring-form tin and pour all but 1 tbsp of the base mix into it, then push down with the back of a spoon. Leave to cool and set in the tin.

04 To make the caramel, put the sugar and butter in a heavy-bottomed saucepan and cook over a low heat until they begin to melt together. Turn up the heat and let it bubble until the sugar has dissolved. Remove from the heat, add the chocolate and cream and whisk as the chocolate melts. Once fully incorporated, mix in the rock salt and allow to cool. Cover and place in the fridge.

05 For the banana topping, peel the bananas and slice them into ½in-thick rounds. Place a large frying pan over a medium-low heat, then add the butter and sugar and allow the butter to melt. Add the banana and leave to bubble away. If you’re using whisky, add it now and let it cook down, turning the banana slices once. When they’re looking golden and sticky, remove from the heat and leave to cool in the pan.

06 Whisk the double cream and vanilla bean paste together until it’s smooth and light, taking care not to over-whip it. Place in a piping bag, if you have one, with a large nozzle of your choice.

07 Once all the ingredients have cooled, it’s time to assemble. Pour the salted caramel over the base and spread it so it’s nice and even — try not to disturb the base. Then layer the sticky banana pieces on top, so the caramel is covered. Pipe or spoon the cream onto the banana layer, starting from the outside and working inwards, with the peaks increasing in height as you reach the centre of the pie.

08 Sprinkle over the reserved tablespoon of base mix and grate over the chocolate. For the adults, serve with a wee dram of whisky — perfect in front of the fire.