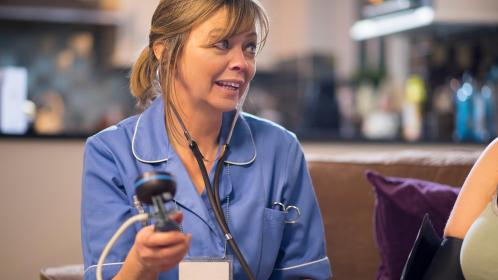 The blood pressure of pregnant women should be monitored more regularly to prevent them from developing kidney disease later in life, a new study says.

Research from the University of Aberdeen found an increased risk of chronic kidney disease later in life for mothers who had high blood pressure during pregnancy.

The study followed women up to 60 years after their pregnancy and found that those who experienced hypertensive disorders — high blood pressure, pre-eclampsia or eclampsia — were more likely to suffer from kidney disease at a later date than those who had normal blood pressure.

One researcher, Dolapo Ayansina, said: “We found that there are long-term health problems associated with high blood pressure during pregnancy. Women who experienced hypertensive disorders during pregnancy were found to be at a greater risk of kidney disease long after the pregnancy.

“The aim of the paper was to ask if we are doing enough for women who have had hypertension in pregnancy — currently we manage the symptoms during pregnancy, then the women are sent home when blood pressure returns to normal. We were wondering if there’s a need to follow up these women. Do we just send them home or should we keep an eye and if there are problems we should catch it early.

“Our recommendations would be that we should keep an eye on the renal function of these women who are at greater risk of kidney disease so that we can manage this if a problem occurs.”