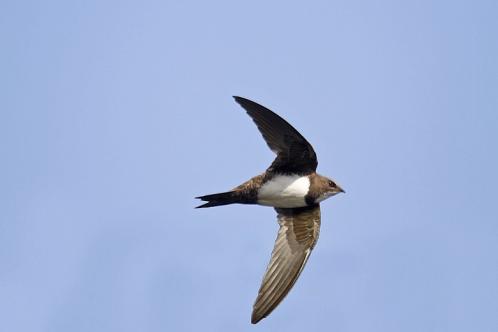 Hobbies are small, slate-blue falcons that visit us for the summer, and used to be scarce birds encountered on remote heaths.

They have become more common in recent years, and nest now in isolated clumps of trees in quiet farmland. They are just returning from southern Africa, and when they first arrive are often found feeding over lakes and marshes. One should look out for a bird with narrow, swept-back wings, rather like a swift’s, sweeping through the sky in search of flying beetles. They also catch small birds in the air, pursuing them in deft and spectacular style. House martins are also returning now, and will be an important prey for hobbies. The hobbies can catch fast-flying swallows, and even swifts, but in late summer, when they themselves have young in the nest, they turn their attention to young house martins that are newly on the wing. These are still clumsy flyers, so are easy to catch. At present the martins too are feeding on insects over lakes, but they will soon be back around the buildings where they make their mud nests under the eaves.